April 3, 2015 · by Rise Up Times · in Activism, Constitutional Rights, Freedom of Speech, Racism

Billie Holiday and Ethel Rosenberg at 100

If Billie Holiday and Ethel Rosenberg were alive, they’d both celebrate their 100th birthdays this year. At first glance they may seem an unlikely couple, but a closer look reveals surprising parallels.

They were each born into poverty six months and a hundred miles apart. Billie in April 1915 in Philadelphia, and Ethel in September in lower Manhattan. Both had extraordinary singing voices, although Billie’s vocal genius eclipsed Ethel’s. Still, Ethel’s teachers considered her voice so special that they called her out of class to sing the national anthem at assemblies.

Both girls were precocious. Ethel graduated high school at 15 and tried to pursue a singing and acting career. At the height of The Great Depression, she could only find work as a clerk-typist in New York’s garment district. There she helped organize and lead a strike at 19. Billie was singing in clubs in Harlem at 17, and made her mark as a recording artist before she was 20.

Both got in trouble with the law. Billie first ran afoul of powerful forces for singing “Strange Fruit,” the anti-lynching anthem. Her performances generated threats, even riots. Josh White also sang the song and was questioned by the House Un-American Activities Committee during the McCarthy period. He bowed to their demands that he stop. Billie defiantly refused and continued singing “Strange Fruit.” Many believe that her resistance led law enforcement to hound and arrest her in 1947 for drug possession. She served almost a year in prison, and her conviction disrupted her career for the rest of her life. 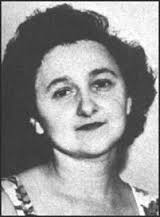 In 1950 Ethel was arrested with her husband Julius and charged with Conspiracy to Commit Espionage; they were convicted and sentenced to death. The government knew she had not committed espionage, but they held her as a hostage to coerce her husband into cooperating with the authorities. She refused to confess to something she did not do and backed her husband’s refusal to implicate others. The FBI files never claimed she was guilty, but consistently described her as “cognizant and recalcitrant.”

You might conclude that Billie and Ethel had similar talents and defied similar enemies.

Both died prematurely, victimized by law enforcement. Ethel was executed in 1953 at age 37, and Billie died in a hospital bed at age 44, while awaiting arraignment after another drug arrest.

Billie and Ethel followed different paths in life and probably never met, but they converged in death. High school English teacher, poet, and songwriter Abel Meeropol wrote “Strange Fruit” after seeing a photograph of a lynching. He played it for Billie Holiday in 1939, when she was performing at Cafe Society and she subsequently began performing it.

Fourteen years later, Abel helped carry Ethel Rosenberg’s coffin to her grave site. Within a year, Abel and his wife Anne had adopted Ethel and Julius’ sons. The man who abhorred lynching and wrote one of the most iconic songs in Billie Holiday’s repertoire, adopted Ethel’s orphans, my brother Michael and me.

In 2015, the centennial year of both of their births, we remember Billie Holiday for singing about lynching, and we remember Ethel Rosenberg for being legally lynched.

Robert Meeropol is the younger son of Ethel and Julius Rosenberg and founder of the Rosenberg Fund for Children (www.rfc.org), a foundation he started in his parent’s honor to help the children of today’s targeted activists.

Editor’s Note: For people in the Twin Cities, and others who are interested in reading a recommended book:

My visit to Minneapolis is only a couple of weeks away. I hope you will be able to attend my reading (Sunday, April 12, 2015, 2:00, at Magers and Quinn Bookstore) and that you will invite your friends. Material is below, if you want to read a bit about the novel and forward to people you think might be interested.
Elli
Elli Meeropol is the granddaughter of Ethyl Rosenberg.
ABOUT THE BOOK
As a major hurricane threatens the northeast, federal agents abduct math professor Gandalf Cohen from JFK airport, and fly her to a secret island interrogation center off the coast of Maine. Henry, the FBI special agent in charge, doubts that the professor has any credible information about terrorism and orders her treated with restraint. His second-in-command Tobias disagrees and proceeds with vigorous questioning. Gandalf’s only hope is her guard, newly-hired local resident Austin Coombs who is uncomfortable with Tobias’ rough methods. Told by multiple narrators on both sides of the political divide over five days approaching an anniversary of 9/11, On Hurricane Island is both a fast-faced political thriller and a literary examination of critical issues facing our society.
“On Hurricane Island is a chilling, Kafkaesque story about what happens when the United States does to citizens at home what it has done to others abroad. Meeropol puts the reader right into the middle of these practices through characters about whom you really care and a story you can’t put down; a really good book.”
—Michael Ratner, Center for Constitutional Rights
“On Hurricane Island is unflinchingly political, unashamedly suspenseful, and, above all, deeply human. Here is a writer who knows how to ramp up the tension while never sacrificing the spirit of her conviction, the sense of grounding in the natural world, or the heartbreaking complexity of her characters.”
—Naomi Benaron, Bellwether Prize winner for Running the Rift
For more information about Ellen and this novel: www.ellenmeeropol.com