May 20, 2016 · by Rise Up Times · in Activism, Freedom of Speech, nonviolent action, Nonviolent direct action · 1 Comment 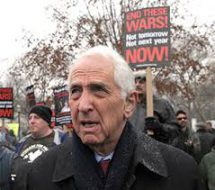 “Incidentally, having never been arrested, I didn’t know if I’d be allowed to take a book with me.”

This is how Daniel Ellsberg, former government analyst and the man who leaked the Pentagon Papers, describes his mindset during the 1971 May Day protests against the Vietnam War. While Ellsberg is nonchalant when recalling his experience over those few days in early May, his fascinating tale of resistance to government shows that it was by no means an easy choice. In the video below, he sits down with Judy Gumbo Albert, a Vietnam War protester and peace activist, to relive the events on the 45-year anniversary of the “Mayday Tribe’s” actions.

Ellsberg explains how nonviolent action has the potential to influence current global issues. “It has to take place without violence, but it won’t take place without courage, people willing to commit themselves,” Ellsberg says. “The spirit that I saw that day in the young people on May Day is one of the most encouraging sights I’ve ever seen in my life.”

Watch the full interview below:

← Glenn Greenwald | The Intercept is Broadening Access to the Snowden Archive. Here’s Why
Evergreene Digest: Obama is bullish on war, no matter how you spin it. →