Corporations are working with the Department of Commerce to eliminate the few but significant labor and environmental protections . . .

2018 elections may decide the fate of N. American trade agreements… 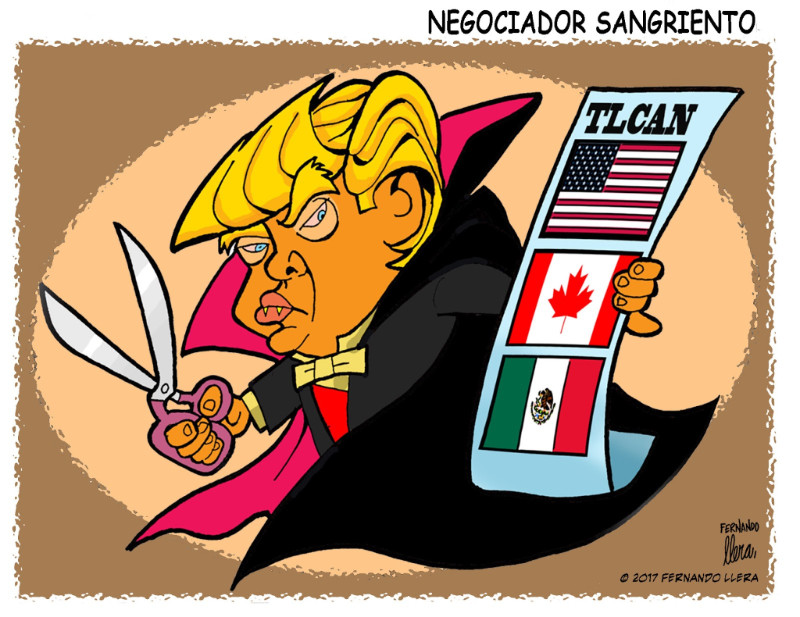 Trade policy is amounting to be an increasingly contentious topic as the Trump administration has clearly showed its intentions to keep major TPP provisions in NAFTA. Corporations are working with the Department of Commerce to eliminate the few but significant labor and environmental protections the government enforces while members of Congress begin to campaign around trade. 2018 promises to put trade policy at the forefront as presidential elections in Mexico and mid-terms in the United States could determine the fate of North American trade agreements to come.

The Trump administration is taking concrete steps towards eliminating existing environmental and labor standards according to a Washington Post special report published on Sunday. Through an executive order, the administration invited American manufacturers to provide recommendations on what regulations the government should cut to benefit their industries. The result is a devastating indication of steps the Department of Commerce is likely to push forward.

From the 168 comments submitted, the Environmental Protection Agency (EPA) was the primary target, accounting for nearly half of all deregulation recommendations, followed by the Department of Labor. British Petroleum (BP) notably recommended to make it easier to drill for oil and gas in the Gulf of Mexico, the exact location of their disastrous oil spill, by reducing how often companies must renew leases. Secretary of Commerce Wilbur Ross declared that the recommendations will be refined and translated into action. A corporate siege on already insufficient environmental and labor protections.

These steps are directly contrary to a vision of trade that puts people and the planet first. A few weeks ago, a consortium of environmental and trade justice organizations released an eight-point proposal to improve NAFTA that consistently emphasizes the need to increase protections for workers and the environment. Trump’s plans unsurprisingly represent a threat to our global environmental conditions and the rights of workers domestically and abroad. If the administration’s proposals for domestic deregulation and NAFTA renegotiations are eventually passed in Congress, the pain our communities will endure will only become more severe and prolonged.

With the 2018 mid-term elections on the horizon amidst this context, trade policy is already becoming a campaign issue for members of Congress.

Members of Congress are already campaigning around NAFTA

Sen. Sherrod Brown from (D-Ohio) expressed willingness to work with Trump on trade just eight days after the elections. Furthermore, he has called the United States Trade Representative nominee Robert Lighthizer “maybe the best pick in the whole administration.” Just last week, Sen. Brown hosted an event with auto workers in Toledo to discuss the NAFTA renegotiations in which he expressed support for rules of origin standards and criticism of the investor-state dispute settlement.

Sen. Claire McCaskill (D-Missouri) has hosted eight town hall meetings in her state in the last week in which she has brought up the significance of Trump’s trade policy on Missouri farmers. “The retaliation that could occur in some of the ways that Trump wants to change trade policies could rest at the feet of our producers in this state and I’m worried about that,” says McCaskill. “And, I think we have to be on the lookout for it and be very careful.” Canada and Mexico represent the majority of Missouri’s export market, making NAFTA renegotiations a critical issue for voters.

Even House Representatives are giving their two cents on NAFTA. Rep. Henry Cuellar (D-Laredo, TX) has praised Trump for backing away from his harsh rhetoric to instead embrace many of the provisions within the TPP for the NAFTA renegotiations. Rep. Cuellar was even joined by Sen. John Cornyn (R- Texas) in a meeting with Laredo political and industry leaders to assure them of NAFTA’s benefits. These collaboration between these Texan members of Congress is not an uncommon occurrence when it comes to protecting the interests of major corporations (and potential donors).

Trade policy will be a key issue for the congressional elections as candidates seek to court local and state-wide industry leaders. We expect to see bipartisan support for environmental and labor deregulation along with the survival of ISDS provisions in NAFTA. It will be a strategic time to build on the momentum of defeating the Trans-Pacific Partnership to have elected officials support trade policy for the people and the planet, not for the exclusive interests of industry leaders.

Mexico’s 2018 Presidential Elections Could Change Everything

The Mexican presidential elections will take place in 2018, possibly changing the future of what commerce between Mexico and the United States looks like. Recent polls indicate that leftist leader Andrés Manuel López Obrador is the favorite candidate thus far, challenging the long-time hegemony of President Enrique Peña Nieto’s PRI party.

The current Mexican administration has indicated it would like to begin negotiations as soon as this summer. And Mexico’s current chief trade negotiator, Economy Minister Ildefonso Guajardo, said last month that extending talks past early 2018 would be “irresponsibly injecting uncertainty after uncertainty” due to the Mexican elections, and the U.S. mid-term congressional vote in November 2018. That is, the current Mexican government wants the negotiations finalized by early 2018.

López Obrador, as opposed to the current administration, has advocated against “indiscriminate and unlimited free trade” and has promised to protect agricultural workers who had been most affected by the original NAFTA deal by providing subsidies to produce certain agricultural goods, just as the United States does. López Obrador’s proposals would likely signify increased protections for Mexican workers and the environment.

If NAFTA is renegotiated before the 2018 United States congressional elections and Mexican presidential elections, then the deal will certainly become a pressing electoral issue that determines who sets trade policy there on. This will be particularly true as congressional incumbents will have voted on the new trade agreement before the November elections.

If renegotiated afterwards, the Trump administration may be facing bold new leadership from Mexico and will contend with the threat of not having Fast Track authority to force an up-or-down vote from Congress given that this authority must be renewed prior to July 1, 2018.

2017 will be a key year to prepare for significant battles regarding trade justice as NAFTA becomes an increasingly prominent issue in electoral politics throughout the continent. It is up to us to create the alternative to corporate trade agreements in an era that needs vision more than ever.

Will you continue to support the fight to protect the Earth and its people from the consequences of an unjust global trade system? Share this email with at least two friends and help us get more subscribers by recommending they sign up for the mailings on our site: www.tradeforpeopleandplanet.org/.

Unite for Global Justice,
Trade for People and Planet Team