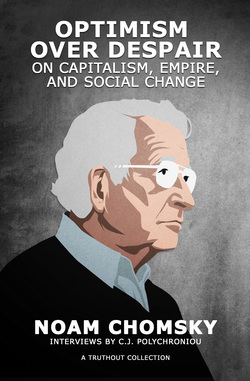 Optimism over Despair  On Capitalism, Empire, and Social Change

By Noam Chomsky and C.J. Polychroniou

Wide-ranging interviews on war, power, and politics with Noam Chomsky, the world’s leading critic of US foreign policy.

This volume offers readers a concise and accessible introduction to the ideas of Noam Chomsky, described by the New York Times as “arguably the most important intellectual alive.”

In these recent, wide-ranging interviews, conducted for Truthout by C. J. Polychroniou, Chomsky discusses his views on the “war on terror” and the rise of neoliberalism, the refugee crisis and cracks in the European Union, prospects for a just peace in Israel/Palestine, the rise of the Black Lives Matter movement, the dysfunctional US electoral system, the grave danger posed to humanity by the climate crisis, and the hopes, prospects, and challenges of building a movement for radical change.

Noam Chomsky is Institute Professor (Emeritus) in the Department of Linguistics and Philosophy at MIT. His work is widely credited with having revolutionized the field of modern linguistics. He is the author of numerous best-selling political works, which have been translated into scores of languages worldwide.

C. J. Polychroniou is a regular contributor to Truthout as well as a member of Truthout’s Public Intellectual Project. He has published several books and his articles have appeared in a variety of journals, magazines, newspapers, and popular news websites.

“The elder statesman of a resurgent left offers clear-eyed assessments of the US, past and present, and its role in the world. From meditations on human nature to strategic advice for the Trump era, Chomsky remains the thinker who shaped a generation, a beacon of hope in the darkest of times.” —Sarah Jaffe,  Necessary Trouble: Americans in Revolt

This book of interviews with Noam Chomsky is a must read in these troubling times. Divided into three parts, it begins with Chomsky’s razor sharp analysis of neoliberalism, imperialism, the EU, the role of religion in politics, and class polarization. In the second, it focuses on the Trump presidency and lays out the long history of US foreign policy, as well as other topics such as health care, global warming and education policy. Finally, it looks at various alternatives—anarchism, communism and socialism. This is an excellent collection of interviews that highlights Chomsky’s encyclopedic knowledge of the key issues of our day and his unwavering criticism of the regime of the global 1%.” —Deepa Kumar, Islamophobia and the Politics of Empire.

“In this brilliant series of recent and wide-ranging interviews, Noam Chomsky combines an astounding breadth of knowledge, great depth of insight, clarity in explaining his ideas, and a relentless commitment to social and economic justice. The full package is simply exhilarating, especially in our current dismal era of Donald Trump. Optimism over Despair is a book to devour.”—Robert Pollin, Distinguished Professor of Economics and Co-Director, Political Economy Research Institute, University of Massachusetts-Amherst

“…Chomsky argues that the choice between optimism and despair is really no choice at all. I have a great admiration for Chomsky’s combination of consistent critical moral perspective and sharp eye for the details of world politics…”—Heikki Patomäki, professor of world politics at the University of Helsinki, and a civic and political activist

“In this series of highly informative conversations deftly organized by CJ Polychroniou, Noam Chomsky teaches us – yet again – so much on a huge range of issues – from economic globalisation through international politics to the linguistic foundations of humanity. If you haven’t read Chomsky before, this book will open your eyes. Even if you have, reading this book will make you realize that you still have more eyes to be opened. This book is a beacon – or, rather a GPS – in this turbulent and darkening world.”—Ha-Joon Chang, University of Cambridge, author of Bad Samaritans, 23 Things They Don’t Tell You About Capitalism and Economics: The User’s Guide

“For all those of us who have always dreamed of spending a day with Noam Chomsky and getting his answers to all our questions and concerns about the (sorry) state of the world, here’s the next best thing: a collection of interviews with our greatest living intellectual on capitalism, empire, and social change, fielded by C. J. Polychroniou of Truthout.  Especially valuable in helping us navigate the dreadful challenges of the Trumpian era.”—Michael Klare, Professor of Peace & World Security Studies, Hampshire College and Defense Correspondent, The Nation

Available from Haymarket Press  (E-book or paperback). Truthout also has available with a donation.

Media for the people!  Learn more about Rise Up Times and how to sustain
People Supported News.
Follow RiseUpTimes on Twitter RiseUpTimes @touchpeace