Net neutrality is being stolen from you.  Here are suggestions to stop the theft.

Note: The battle for a free and open Internet that is equal to all as a public utility continues.  The net neutrality movement will continue urging members of Congress to support the resolution under the Congressional Review Act to repeal the FCC rule overturning net neutrality. In addition, litigation is continuing to overturn the rule and strong issues are being raised so the court will remand the rule and order the FCC to reconsider. And, there are important net neutrality battles on the state level.

You can take action at BattleForTheNet.com.

Here are some facts on the state of net neutrality in the United States:

Net neutrality is being stolen from you. And we have a warrant out for each and every House of Representatives member that has yet to sign to force a vote to reinstate net neutrality rules.

Right now the Internet is dying because there are no net neutrality rules in place, but the fight is not over. 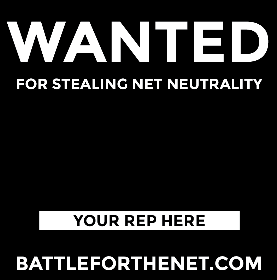 Join the protest by sharing our wanted posters and using them as your social media avatar/profile pic. Let your representatives know that they are wanted and we want our net neutrality back.

We’ve already won in the Senate, now we need to shine a spotlight on every member of the House of Representatives that has taken the free and open Internet from us by not signing the discharge petition that would have stopped the FCC’s repeal from going into effect tomorrow.

With midterm elections coming up, lawmakers will be feeling vulnerable. This is the perfect moment to put pressure on House lawmakers. There is still time for Congress to overturn the FCC’s repeal and reinstate net neutrality rules through the Congressional Review Act (CRA).

This is the start of the Net Neutrality Summer Offensive! Here’s how you can help:

Now is the time to put our outrage and energy toward effective actions!

Like many other independent news and media sites, Rise Up Times has noticed a decline in the number of people looking at articles due to censorship by Google and Facebook. Independent journalism has become the last bastion in seeking and telling the truth as government and corporate lies are promoted by the mainstream corporate media. In the name of democratic rights for all, please support us now and share articles widely. The people, Yes!