The UN is dominated by global finance and corporations and their subservient governments pushing financial schemes and green technology to enrich themselves even when those projects don’t solve the problem.

Activists march in a climate change rally in London, Britain,
Sept. 20, 2019. From Reuters.

On December 2, the 25th two-week long United Nations climate conference begins in Madrid, Spain. The stated task of the conference, referred to as COP 25 (Conference Of Parties), is to make sure there are plans to meet the goals of the Paris Climate Agreement. The goals of that agreement, which are nonbinding, are:

Last week, prominent scientists issued a warning that significant changes related to the climate crisis are already happening and could create a cascading effect that locks in catastrophic levels of temperature and sea-level rise. They view the pledges made by countries to take climate action as insufficient and leading to a three degrees Celsius temperature rise by the end of the century.

It is this reality that is spurring people around the world to take action in the growing global climate emergency movement. Many people are asking what they can do about the climate crisis. 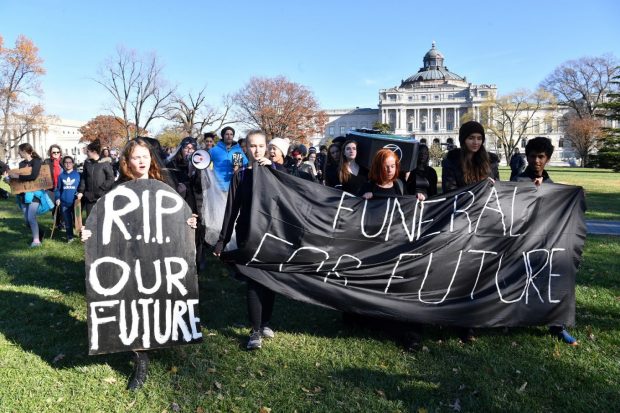 Young activists take part in a rally to protest against Climate change outside the US Capitol in Washington, DC on November 29, 2019. (AFP/Nicholas Kamm).

Too little, too late

Each new climate report is direr. The climate crisis is here now. Oceans are heating up and acidifying as they absorb carbon dioxide. This is slowing ocean circulation and killing coral reefs. Ocean circulation impacts the weather – slowing is already changing weather patterns and worsening storms. Coral reefs are necessary for providing habitat and protecting coastlines.

According to a recent Intergovernmental Panel on Climate Change (IPCC) report, ice is melting at an unprecedented pace and sea-level rise is accelerating. This is leading to more frequent and chronic flooding. The world has already warmed to 1.1 degrees Celsius above pre-industrial levels causing droughts and frequent wildfires.

Of great concern is the fact that these changes are not isolated. They feed into and feed off of each other causing a cascading impact that is leading us to a point of no return, at least for thousands of years. For example, as the land thaws, stored methane is being released. Methane is the most potent greenhouse gas in the short term causing more warming and more thawing. The prominent scientists cited above explain this:

“…as science advances, we must admit that we have underestimated the risks of unleashing irreversible changes, where the planet self-amplifies global warming. This is what we are seeing already at 1°C global warming…”

Efforts to reduce greenhouse gas (GHG) emissions are failing. Levels are rising even though we need at least a 7.6 percent reduction each year to reach the Paris Agreement goals. Growing energy demand is the biggest culprit. Colder winters and warmer summers mean more energy used to heat and cool our homes and other buildings. In the United States, gas consumption increased by ten percent in 2018 after years of decline. The increase in renewables is not even meeting new energy demands, let alone replacing polluting forms of energy production.

Even though the United Nations admits that not enough is being done to address the climate crisis and that there is no time to waste, it does not wield its power to make sure that effective actions are taken. Instead, as we wrote in 2014, the UN is dominated by global finance and corporations and their subservient governments pushing financial schemes and green technology to enrich themselves even when those projects don’t solve the problem.

In this year’s meeting, the major focus will be the rules for the newest form of a global carbon trading market mandated by the Paris Agreement. Carbon trading has been in existence since the Kyoto Protocol and has not reduced carbon emissions. California’s cap and trade system, one of the largest in the world, is being copied by other countries, but ProPublica found that carbon emissions in California have risen by 3.5 percent under the program as it allows big polluters to purchase credits and even increase their emissions.

There have already been mass protests around the world leading up to the COP meetings. In expectation of more protests at the meetings in Spain, more than 5,000 police have been called out. Thousands of anti-capitalist activists, environmental defenders, and concerned citizens are arriving from all over the world to demand that countries take concrete measures to halt global climate change. The police are on high alert throughout the COP meetings until December 14.

This is the last year that the United States will participate in the United Nations COP meetings as Trump formally withdraws from the Paris Agreement. What are activists in the US to do? 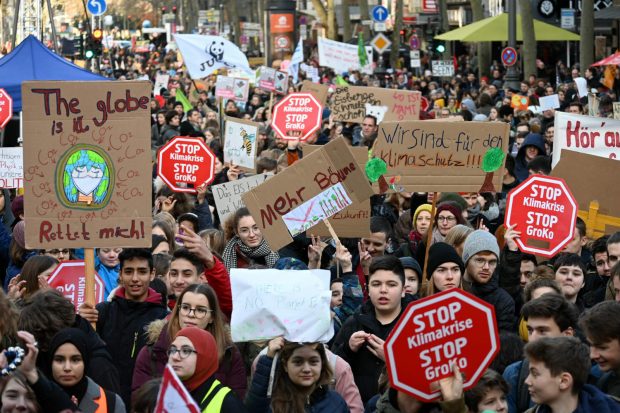 Climate Demonstrators in Cologne on November 29, 2019, before the UN climate summit. Source DPA

Action for the climate

The United States is the second-largest total GHG emitter in the world and the third-largest per-capita GHG emitter behind Saudi Arabia and Australia. The US is the largest producer of new fossil fuels. People in the US have a critical responsibility and role to play in the solution to the climate crisis.

There are lots of discussions going on right now about what people need to be doing and the answer is that we need to be using all the tools available. We cannot count on institutions such as the United Nations, governments and corporations to take appropriate actions without outside pressure. We need to organize resistance and build the solutions in our communities.

A core requirement of effective social movements is to have a clear vision of what they are working to achieve. To be transformational, this vision must embody not only the goal (for example, reducing GHG emissions) but also the structure of the system that will achieve that goal. Two major components of that structure are the ways decisions will be made and how the system will be financed. For more information on social transformation, visit the Popular Resistance School.

Currently, it is the powerholders who make and profit from the decisions. A new system, such as the Green New Deal, could be structured in a way that puts those who are most impacted by the decisions in control and could be financed in a way that reduces the wealth divide. The Ecosocialist Green New Deal, developed by Howie Hawkins, a candidate running for the Green Party presidential nomination, is the strongest proposal. It has the fastest timeline, includes a transition to a peace economy with 75 percent cuts to the military, an Economic Bill of Rights and a Green Economy Reconstruction Program. It would transform multiple sectors of the economy to put in place a clean energy economy by 2030 as well as transitioning to public or worker-controlled ownership.

The next requirements are a strategy to achieve the vision and tactics to serve that strategy. There are a broad range of actions to take and a number of roles to play. Here is a partial list of current actions:

These are a few examples of many activities for the climate that are being organized. Here are a few final thoughts and observations. First, while changing our personal habits to reduce consumption and emissions is important for transitioning to the world we are working to create, we must remember that the drivers of the crisis are systemic and require systemic solutions. Second, activists often struggle with the issue of activism versus electoral politics. Our view is that in the manipulated US election system, we can’t elect our way out of these crises. Throughout history, it has been mass popular movements that have forced powerholders to either make necessary changes or to lose their power. Electoral politics is a useful tool when it is used to raise awareness for our issues and expose the failings of the current political system but the major focus of our work must be movement building.

Perhaps one of the most exciting developments is the rise of anti-capitalist protests around the world against neoliberalism, a model that drives privatization of land, water, services and more. We can’t solve the climate crisis using capitalist economic models because capitalism is fundamentally about extracting profits at all costs and is based on the overconsumption of a consumer-oriented economy.

Another promising development is the work to make connections between the many crises we face. We cannot solve the climate crisis in isolation because it requires a major restructuring of our entire society. This is the opportunity the climate crisis provides. Over the next decade, with a clear vision of where we want to go, we can shape the world to be one that respects self-determination, human rights and sustainability. That will only come about through organization, planning, and action to create a mass movement.

Excerpt: This is the last year that the United States will participate in the United Nations COP meetings as Trump formally withdraws from the Paris Agreement. What are activists in the US to do?

This is the last year that the United States will participate in the United Nations COP meetings as Trump formally withdraws from the Paris Agreement. What are activists in the US to do?
◊ Truth is not fake news.  Justice is not fake news. Learn more about and donate to Rise Up Times now and share articles widely. The people, Yes! ◊ The contents of Rise Up Times do not necessarily reflect the views of the editor. Articles are chosen for republication based on the interest of our readers. Rise Up Times republishes articles from a number of other independent news sources as well as original articles and stories.