Stockholm, 27 April 2020—Total global military expenditure rose to $1917 billion in 2019, according to new data from the Stockholm International Peace Research Institute (SIPRI). The total for 2019 represents an increase of 3.6 per cent from 2018 and the largest annual growth in spending since 2010. The five largest spenders in 2019, which accounted for 62 per cent of expenditure, were the United States, China, India, Russia and Saudi Arabia. This is the first time that two Asian states have featured among the top three military spenders. The comprehensive annual update of the SIPRI Military Expenditure Database is accessible at www.sipri.org. 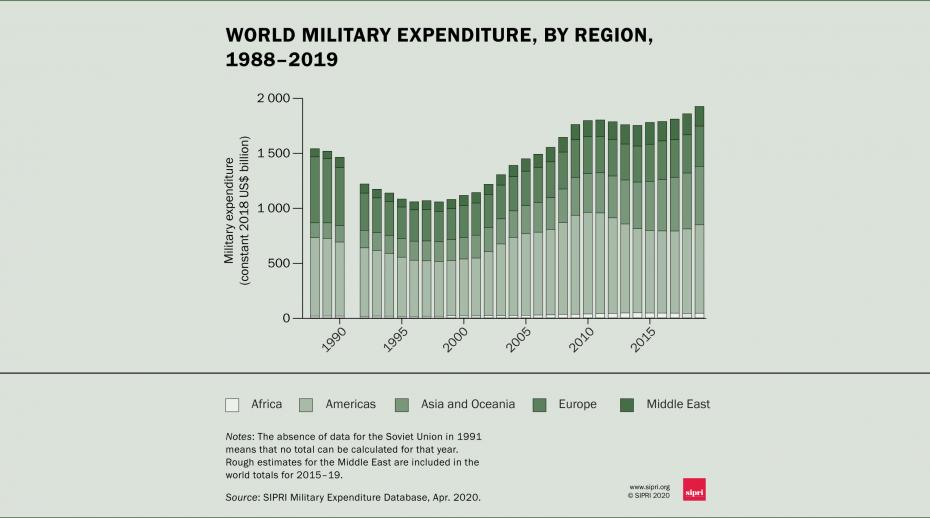 Global military spending in 2019 represented 2.2 per cent of the global gross domestic product (GDP), which equates to approximately $249 per person. ‘Global military expenditure was 7.2 per cent higher in 2019 than it was in 2010, showing a trend that military spending growth has accelerated in recent years,’ says Dr Nan Tian, SIPRI Researcher. ‘This is the highest level of spending since the 2008 global financial crisis and probably represents a peak in expenditure.’

Military spending by the United States grew by 5.3 per cent to a total of $732 billion in 2019 and accounted for 38 per cent of global military spending. The increase in US spending in 2019 alone was equivalent to the entirety of Germany’s military expenditure for that year. ‘The recent growth in US military spending is largely based on a perceived return to competition between the great powers,’ says Pieter D. Wezeman, Senior Researcher at SIPRI.

In 2019 China and India were, respectively, the second- and third-largest military spenders in the world. China’s military expenditure reached $261 billion in 2019, a 5.1 per cent increase compared with 2018, while India’s grew by 6.8 per cent to $71.1 billion. ‘India’s tensions and rivalry with both Pakistan and China are among the major drivers for its increased military spending,’ says Siemon T. Wezeman, SIPRI Senior Researcher.

In addition to China and India, Japan ($47.6 billion) and South Korea ($43.9 billion) were the largest military spenders in Asia and Oceania. Military expenditure in the region has risen every year since at least 1989.

Germany’s military spending rose by 10 per cent in 2019, to $49.3 billion. This was the largest increase in spending among the top 15 military spenders in 2019. ‘The growth in German military spending can partly be explained by the perception of an increased threat from Russia, shared by many North Atlantic Treaty Organization (NATO) member states,’ says Diego Lopes da Silva, Researcher at SIPRI. ‘At the same time, however, military spending by France and the United Kingdom remained relatively stable.’

There were sharp increases in military expenditure among NATO member states in Central Europe: for example, Bulgaria’s increased by 127 per cent—mainly due to payments for new combat aircraft—and Romania’s rose by 17 per cent. Total military spending by all 29 NATO member states was $1035 billion in 2019.

In 2019 Russia was the fourth-largest spender in the world and increased its military expenditure by 4.5 per cent to $65.1 billion. ‘At 3.9 per cent of its GDP, Russia’s military spending burden was among the highest in Europe in 2019,’ says Alexandra Kuimova, Researcher at SIPRI.

Data from previous global economic downturns suggests that the economic crisis resulting from the coronavirus disease 2019 (COVID-19) pandemic will probably disrupt future military spending. SIPRI is monitoring current developments to assess the extent of this crisis on military spending.

All percentage changes are expressed in real terms (constant 2018 prices). Military expenditure refers to all government spending on current military forces and activities, including salaries and benefits, operational expenses, arms and equipment purchases, military construction, research and development, and central administration, command and support. SIPRI therefore discourages the use of terms such as ‘arms spending’ when referring to military expenditure, as spending on armaments is usually only a minority of the total.