September 10, 2020 · by Rise Up Times · in Activism, Constitutional Rights, Freedom of Speech, Media 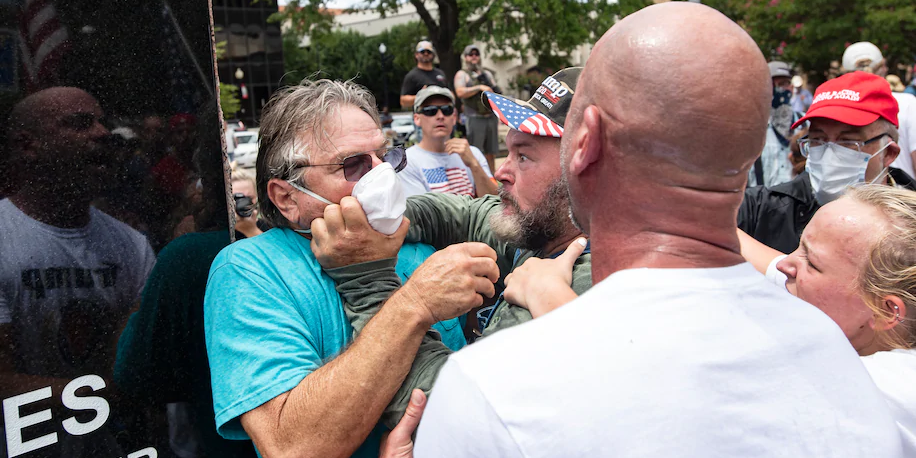 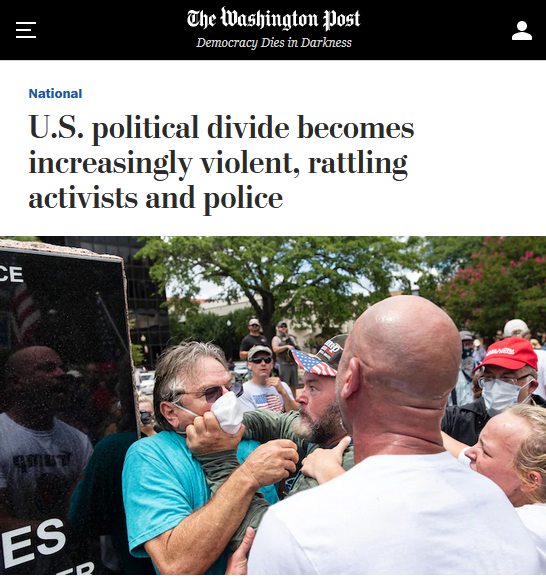 The Washington Post piece (8/27/20) was illustrated with a photo of an activist being attacked by a violent divide.

“US Political Divide Becomes Increasingly Violent, Rattling Activists and Police,” a Washington Post headline (8/27/20) declared last week. My high school English teacher would have taken a red pen to that title, pointing out that divides cannot be violent, only people can. People on both sides of a divide are becoming violent, is what the Post meant. And that is the real problem with this headline and the 2,800 words that follow.

Especially in an era when lying has been adopted as a key political strategy by the president and many others on the political right, coverage of “both sides” of an issue without plainly separating facts from fiction actively undermines democratic discourse, and the informed citizenry on which it depends.

People at the Washington Post are aware of the crucial role the media play in making democracy possible. So aware, in fact, that they introduced the paper’s first slogan in its history—“Democracy Dies in Darkness”—a month after President Donald Trump took office. It’s hard not to assume the timing was an indication of the Post’s expectation that a vigilant press would be especially necessary in a Trump presidency.

In the extensive genre of corporate media obfuscation about right-wing paramilitary violence, this WaPo piece stands out even amidst some tough competition. 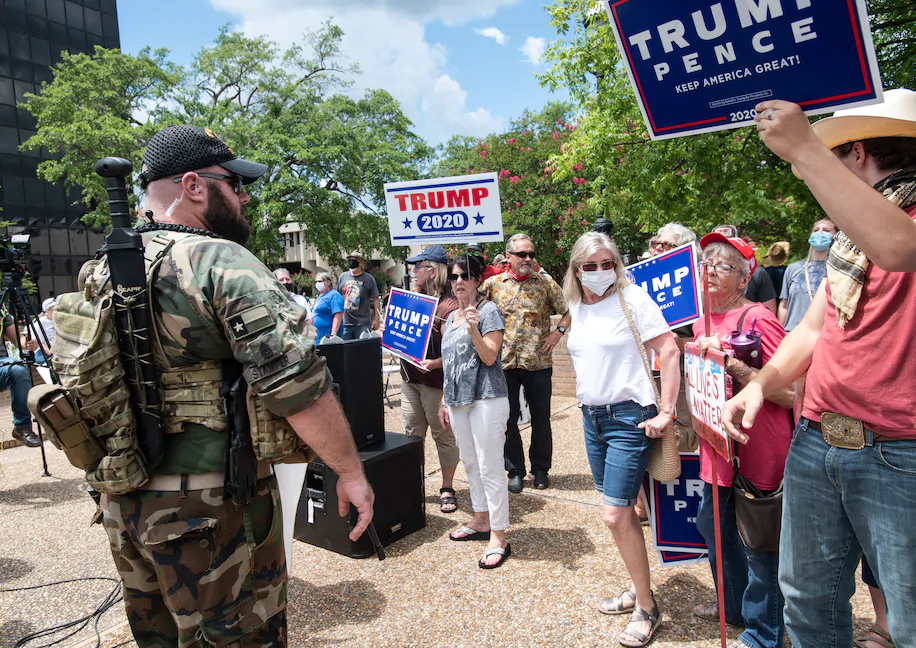 The first four paragraphs of the piece describe an armed right-wing attack on a voter registration rally sponsored by a Democratic congressional candidate in Tyler, Texas (an attack the Post and most other national outlets didn’t bother to cover when it happened several weeks earlier—FAIR.org, 8/11/20). Hundreds of armed people descended on the peaceful crowd, yelling obscenities and physically assaulting them. But this is where the accurate reporting ends.

The next sentence refers to this scene as “scuffling.” It’s not how I would choose to describe a violent attack by heavily armed people. The term both downplays the level of violence and intimidation involved in the attack and vaguely intimates that both sides contributed to it. This trend continues throughout the article, referring to “a spate of exchanges” and a “series of disturbances” to describe a pattern of right-wing political violence directed at protests against police brutality. Later in the article, the Tyler assault is summed up as an incident where “brawls erupted.”

The article claims, without citation or qualification, that “people on both sides…have been filmed exchanging punches, beating one another with sticks and flagpoles, or standing face-to-face with weapons.” Upon finishing the article, the reader finds there were two specific incidents of left-wing menace mentioned: one where a group of protesters harassed restaurant goers for not raising their fists in solidarity with Black Lives Matter (an incident the Post admits was nonviolent); and the case of a driver who was beaten by protesters after crashing his truck.

In contrast to this single assault, the article documents eight recent right-wing assaults on protesters, in addition to the one in Tyler—six of them involving gunshots aimed at protesters, resulting in multiple injuries and four fatalities.

In other words, the article’s factual content itself belies its framing.

The picture it paints is not one of escalating clashes between left-wing and right-wing protesters. Rather, it describes an alarming increase in armed right-wing attacks on peaceful left-wing protesters, usually racial justice protesters. It is a pattern of intimidation and violence, one that is instantly recognizable to any student of 20th century history.

Across the globe, privatized violence aimed at popular democratic demands is a hallmark of right-wing authoritarianism. The failure to name—and, worse, to try to obscure through misleading comparisons—what is plainly a threat to US democracy is a dereliction of journalistic duty.

This article’s sins don’t end there, alas. It manages to talk about these various armed attacks on people protesting police violence throughout the country without ever using the words “racism,” “racist” or “white supremacy.” Instead, we have “politically tinged” violence, “political and cultural debates” and, my favorite, “this year’s bitter political divisions”—as though 500 years of colonialism and white supremacy have nothing to do with 2020’s lethal toll on Black lives.

And how the Post can fail to see the terrifying echoes of the post–Civil War century of privatized violence against Black people in this renewed wave of paramilitary violence is beyond me. A truck full of white people shooting at Black people demanding their civil and human rights is as American as apple pie.

Speaking of similarities of the racist past and the racist present, the police come away unscathed in this article. Police are “on the defensive,” and “face accusations” that they are failing to protect protesters against right-wing assaults and are “cozying up to” the paramilitaries. This is shameful bothsidesism. Police failure to protect protesters and their chumminess with the right wingers is documented fact—including in the article itself!—not some unproven “accusations.”

Moreover, while the Post claims that “the images of looting and violence in American cities after [George] Floyd’s death” have become the right’s “rallying cry,” it fails to mention that said violence is overwhelmingly police violence against peaceful protesters, which is extensively documented.

And just like that, the possibility of democratic protest—the engine of social and economic equality throughout history—is treated like some luxury extreme sport, where you need to consider carefully whether or not to participate. And if you get hurt, it’s your own fault. 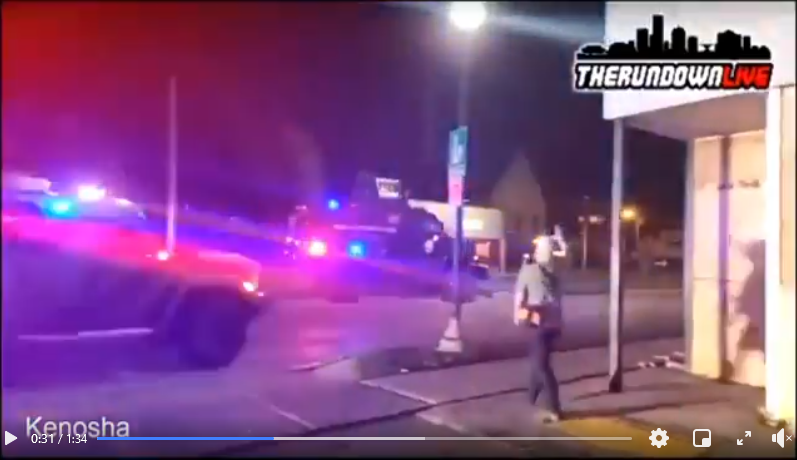 Kenosha police in armored vehicles to a teenager armed with a military-grade rifle: “We appreciate you guys, we really do” (Rundown Live, 8/28/20).

In Kenosha, the same police who shot Jacob Blake seven times in the back let Kyle Rittenhouse walk away two days later after killing two people and wounding a third. Kenosha police had earlier thanked the paramilitary group Rittenhouse was there with—“We appreciate you guys, we really do”—but a day later arrested eight Seattle volunteers with the group Riot Kitchen, who had come to Kenosha to feed racial justice protesters.

Rittenhouse became an instant hero on the right, while Blake lay shackled to his hospital bed. Meanwhile, both local police forces and federal paramilitary units from the Department of Homeland Security continue to suppress anti-violence protests with chemical weapons and other violent tactics.

Trump, who has refused to condemn right-wing violence, defending Rittenhouse’s deadly attack while falsely accusing the left of violence, has also said he plans to send armed sheriffs to polling places for the November election. That’s not in his legal authority to do, but that fact is completely besides the point. The point is that he is adding to the threats of voter intimidation at the polls, all while claiming widespread voter fraud and refusing to say he’ll accept the election results.

The United States is teetering on the brink of full-scale, white supremacist–fueled authoritarianism. In this context, it’s unfathomable that one of the nation’s leading papers could write a piece about right-wing paramilitary violence and reduce it to  “scuffling” without any larger meaning or effect.

Instead of raising the alarm, the Washington Post all but shrugs its conclusion in this article:

With so many people showing up armed, including growing numbers of left-wing ­social-justice activists, police are warning people that they need to understand the risks associated with modern-day protests and political activity.

And just like that, the possibility of democratic protest—the engine of social and economic equality throughout history—is treated like some luxury extreme sport, where you need to consider carefully whether or not to participate. And if you get hurt, it’s your own fault.

Democracy is indeed dying in the dark. And it’s the Washington Post that turned off the lights.

ACTION ALERT: Messages can be sent to the Washington Post at letters@washpost.com, or via Twitter @washingtonpost. Please remember that respectful communication is the most effective.
+++

Rise Up Times needs your help to bring you timely articles and information about so many important current issues in these Rise Up Times. Please donate today and share articles widely.