As the World Burns, Glasgow’s COP26 Called a Failure and Mia Mottley, Call for Action on Climate Crisis

What the world needs to hear.

“Wildly here without control,
Nature reigns and rules the whole…”

Scotland’s most famous poet, Robert Burns, wrote those lines in 1787. If only the delegates to COP26, the United Nations climate summit that wrapped up last Saturday in Glasgow, had heeded his words. The negotiations ended with a document dubbed the “Glasgow Climate Pact” which many climate activists called a failure. “We should call it the ‘Glasgow suicide pact’ for the poorest in the world,” Asad Rehman of the COP26 Coalition said on the Democracy Now! news hour. “It does not keep us below the 1.5 degree [Celsius, or 2.7 degrees Fahrenheit] guard rail. In fact, it heads us closer to 3 degrees [C, or 5.4 degrees F]…They’re ramming through so many loopholes that it makes a mockery of these climate negotiations.

”One draft of the climate pact included an historic first, calling for “the phasing out of coal and subsidies for fossil fuels.” Polluting nations and armies of fossil fuel industry lobbyists managed to dilute that down to “the phase-out of unabated coal power and of inefficient subsidies for fossil fuels.” Thus, coal, the dirtiest fossil fuel, can still be burned with the promise that the resulting pollution will be “abated” with carbon capture and storage, an unproven technology. And the same fossil fuel corporations that have profited for so long while sowing disinformation about the climate will continue to enjoy lavish subsidies at taxpayer expense.

“This summit was betrayal,” Mitzi Jonelle Tan, a climate justice activist from the Philippines, said on Democracy Now! “It is painful for me, knowing that the Philippines is such a vulnerable country for the climate crisis and that we know that we are hit year after year, month after month, with climate impacts.” The Philippines, described as the most storm-vulnerable nation on earth, has been hard hit by a succession of especially destructive, climate change-fueled typhoons over the past decade. “All countries,” she added, “should be phasing out the fossil fuel industry. That doesn’t just stop at coal, but also oil and gas, which the U.S. and the U.K. conveniently took out of the text.”

“There are 30 indigenous nations and 30 million hectares of intact forest that are at stake. We must protect this…The forest is calling on us.”

Indigenous land defenders from the Amazon were also in Glasgow for COP26. The world’s largest rainforest is called “the lungs of the planet” for the vital role it plays in absorbing carbon dioxide from the atmosphere. “We must first change our relationship to nature, change the way we think about the world, and really put at the center of our thinking our connection to life and our commitment to future generations,” Domingo Peas, an Achuar indigenous leader from the Ecuadorian Amazon, said on Democracy Now! “There are 30 indigenous nations and 30 million hectares of intact forest that are at stake. We must protect this…The forest is calling on us.

”The United States and European nations built their enormous wealth by burning coal with abandon for over a century and a half, a cheap but dirty way to achieve growth. The U.S. remains the single largest historical emitter of greenhouse gases, with close to twice the total that China has emitted, based on 2017 data. China is now by far the largest emitter globally.

In recent years, the U.S., the U.K., and most European Union nations have been able to decrease their reliance on coal, shifting to oil, fracked gas, and renewable sources.

Poor, developing nations haven’t contributed significantly to the overall climate crisis, but are suffering disproportionately. To recover from disasters, to adapt to the changing climate, and to build their economies responsibly toward a zero carbon future, these countries need money. COP26 was supposed to deliver on long-promised financing for these needs, but failed to do so.

At COP15 in Copenhagen in 2009, the U.S. and other developed countries pledged $100 billion per year to developing and climate-vulnerable nations from 2020 through 2025. Only a fraction of those funds have materialized, much of it as loans, not as climate aid. Meanwhile, a consortium of African nations recently estimated that the true cost for them to effectively respond to climate change would be closer to $1.3 trillion per year. Polluters should pay, and the United States should lead the way.

Robert Burns died in 1796, when the age of coal was in its infancy. The current National Poet of Scotland is Kathleen Jamie. Inspired by the River Clyde that flows through Glasgow, this week she penned “What the Clyde said, after COP26,” which ends,

“sure, I’m a river,
but I can take a side.
From this day, I’d rather keep afloat,
like wee folded paper boats,
the hopes of the young folk
chanting at my bank,
fear in their spring-bright eyes
so hear this: fail them, and I will rise.” 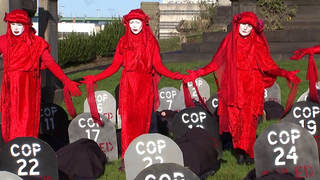 Glasgow Pact Slammed for Betraying the Global Poor Who Suffer Most from the Climate Emergency
The U.N. climate summit in Glasgow, Scotland, ended Saturday with over 190 nations agreeing to the Glasgow… Read More →

← Hedges: The nature of neoliberalism and its consequences, with Wendy Brown
Code Pink: The Cost of War at Home, with United for Peace and Justice →